Assembly Bill 2261 by Assemblymember Ed Chau (D-Monterey Park), which would regulate the way government agencies use facial recognition technology (FRT), was stalled in committee this week. 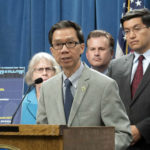 Chau introduced the legislation in February to protect Californians’ privacy as the use of FRT grows with rising ethical concerns.

“While FRT technology has existed for decades, only recently has it begun to pervade our everyday lives at an exponential rate. From assisting smartphone users in unlocking their phones to its use in retail stores, concerts and airports, FRT serves the purpose of identifying people for a variety of reasons,” said Chau at an informational hearing in March.  “The use of FRT, however, brings with it ethical and legal questions that we must answer, as its application becomes more prevalent in our everyday lives.”

From the May 31 Appropriations Committee analysis:

This bill regulates the use of facial recognition technology (FRT) and requires state and local agencies using or intending to use FRT to provide an accountability report demonstrating compliance with required regulations every two years. Specifically, this bill:

1) Mandates any agency using FRT obtain consent from an individual, except in certain circumstances, before enrolling an image in a facial recognition service (FRS) used in any physical premise open to the public.

2) Requires any agency using FRT to ensure any decisions made on the basis of FRT are subject to meaningful human review.

4) Requires the State Auditor, on or before January 1, 2023, and biannually thereafter, to conduct an independent audit and report of all state and local agencies deploying FRT to evaluate compliance with the mandates of this bill.

5) Requires the Department of Justice (DOJ) to bring injunctive action against any person or entity that violates the requirements of this bill. Civil penalties include $2,500 for each violation and $7,500 for any intentional violation of this bill.