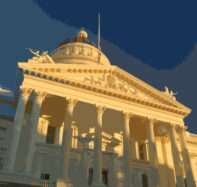 As we have been reporting, there are two bills dealing with the NextEra Eagle Crest Pumped Storage Project, one that is currently being held in committee, and the other which passed unanimously and is on its way to the Appropriations Committee where it will likely be held – at least for a while.

On May 14, the Assembly Water Parks and Wildlife Committee voted unanimously to pass Assembly Bill 2736 that calls on the State Water Resources Control Board (SWRCB) to review the proposed Eagle Crest Pumped Storage Project. The bill calls on Eagle Crest to issue any plans, technical reports, or monitoring data reports related to groundwater to the SWRCB. The bill also allows for civil penalties up to $1,000,000.

The author claims the intent of AB 2736 is to enhance the State’s ability to monitor and quickly respond with tangible enforcement mechanisms to prevent or mitigate any potential threat to the natural resources of Joshua Tree Nation Park from renewable energy development.

However, the bill analysis states, “project proponents cannot be ordered to provide information to the SWRCB. This bill includes provisions that are present in the Eagle Mountain Project’s FERC [Federal Energy Regulatory Commission] license, including the prohibition on the extraction of groundwater in excess of maximum allowable change thresholds. Since the SWRCB has no further discretionary approval authority for the project, and cannot enforce the FERC license conditions, it is unlikely that the SWRCB could take action under this provision of the bill.”

The analysis further stated that, “It is important to note that WAT [water code] § 13350 does not currently cap civil penalties as this bill proposes. Similar to the issues noted above, since the SWRCB has no authority over the project, it could not enforce these provisions.”

Critical support for the bill came from Eagle Crest owner NextEra and also from labor. Meanwhile, a broad coalition of energy producers, renewable energy interests, and environmental groups opposed the bill, claiming it does nothing. “[The bill] does not add protections for Joshua Tree, nor does it address environmental concerns or protect ratepayers from an unnecessary project and costs.”

The opposition sees the bill as another attempt to greenlight NextEra’s Eagle Crest project.

Despite the opposition and the bill analysis, the committee passed the bill unanimously with amendments.

Meanwhile, AB 2255 (Eggman), which requires the California Public Utilities Commission to incorporate long-duration energy storage systems, as defined, into their energy and resource planning, still sits in the Assembly Natural Resources Committee. While the bill is not scheduled, three members of the Parks & Wildlife Committee also sit on the Natural Resources Committee, including the Chair, Laura Friedman.

As we have also previously reported, this is not the first time an Eagle Crest bill has been authored. Senate Bill 772 (Bradford, 2019) would have required the California Independent System Operator (CAISO) to solicit for up to 4,400 megawatts (MWs), as specified, of long-duration bulk energy storage recovered by electric ratepayers in the CAISO grid through a federally approved rate. The bill died on the Senate Floor. AB 2787 (Quirk, 2018) would have required utilities to buy energy from pumped storage hydropower projects like Eagle Crest. The bill died on the Senate Floor.