State CIO and California Department of Technology Director Amy Tong has been appointed to a new post, to serve as director of the Office of Digital Innovation, according to an announcement from the Governor’s Office.

Starting Jan. 1, 2022, Tong will move to the new position, formerly occupied by Udaya Patnaik, who was appointed to the position in May 2020.

Tong is California’s longest-serving State Chief Information Officer, spanning two administrations since her original appointment in 2016 by Gov. Jerry Brown.  She was reappointed to her position by Gov. Newsom in April 2020.

Upon entering office, Newsom created the Office of Digital Innovation (ODI) in 2019 to improve the way California used technology to serve people, “[with] the authority to develop and enforce requirements for departments to assess their service delivery models and underlying business processes from an end-user perspective. Establishing the Office will improve the accessibility and reliability of the state’s vital services by focusing on business process reengineering and leveraging digital innovation, where appropriate,” according to his first budget proposal.

Since then, the office has grown to nearly 30 staff, and as of July of this year, has an aggressive agenda to take on more projects aimed to improve the way Californians interact with their state goverment.

Earlier this year, former Google executive Rick Klau was appointed to serve as CDT’s deputy director for the Office of Enterprise Technology. He is among a number of new high-profile appointments at CDT including:

During her time as CIO and CDT director, Tong championed a user-centered design approach, data-driven decision making, and an agile project management approach, as evidenced by her work with Child Welfare Digital Services (CWDS).

Prior to becoming CIO, Tong assumed multiple roles within the California Department of Health and Human Services, as well as serving as CIO for the California State Lottery. Tong also spent time with CalPERS, the Water Resources Control Board, and earned an MBA from California State University, Sacramento. 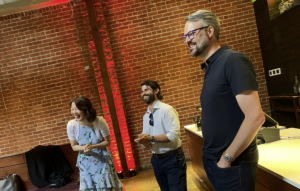 She was instrumental in more successful aspects of California’s response to the COVID-19 pandemic, including the rollout of a new COVID-19 reporting system following the failure of the state’s infectious disease registry CalREDIE to accurately report testing data.

During her time as CIO and CDT director, she faced multiple IT project crises, most notably at DMV and the Employment Development Department (EDD).

In Aug. 2019, the California DMV suffered a data breach that allowed federal agencies illicit access to the Social Security information of 3,200 Californians. Around the same time, the DMV also suffered glitches in its “motor voter” program that included tens of thousands of errors, unknowingly registering citizens to vote or making mistakes in their registration status.

In the wake of the COVID-19 pandemic, EDD failed to deliver unemployment benefits to claimants while also being defrauded to the tune of billions of dollars.

In a Jan. 2021 statement, the department noted that “between March 2020 and January 16, 2021, EDD processed 19.5 million claims and paid out $114 billion in unemployment benefits. EDD confirmed that 9.7 percent of payments have been made to fraudulent claims.”

In response to a number of failed and stagnant IT projects in California, Tong argued for more resources and oversight authority at CDT.

“We are, in many times, operating like an ER doctor,” Tong told Assemblymember David Chiu in a Feb. 2021 budget hearing. “If we can actually have more visibility to the database expenditure, the decision-making, and be more embedded with the department, we can be more into what I call preventive care as opposed to emergency responsive care in terms of the health of the IT investment at the particular program department.”

In this year’s budget, the Legislature approved $25 million in grants to create CDT’s Technology Modernization Fund (TMF) that will allow the department to “provide quick funding to state departments to invest in technology modernization efforts or to stabilize IT systems at risk of failure.”

As State CIO, Tong is the chair of the California Broadband Council, a governing body that is working to close the digital divide within the state.

Following a recommendation from the Little Hoover Commission, Gov. Newsom and legislative leaders agreed to a $6 billion bill that would expand the state’s broadband infrastructure and establish the Office of Broadband and Digital Literacy within the Department of Technology. Tong chairs the Middle Mile Advisory Committee formed to monitor the development and construction of a new broadband network designed to reach unserved and underserved Californians,

Tong’s compensation is $214,284. She is registered without party preference.