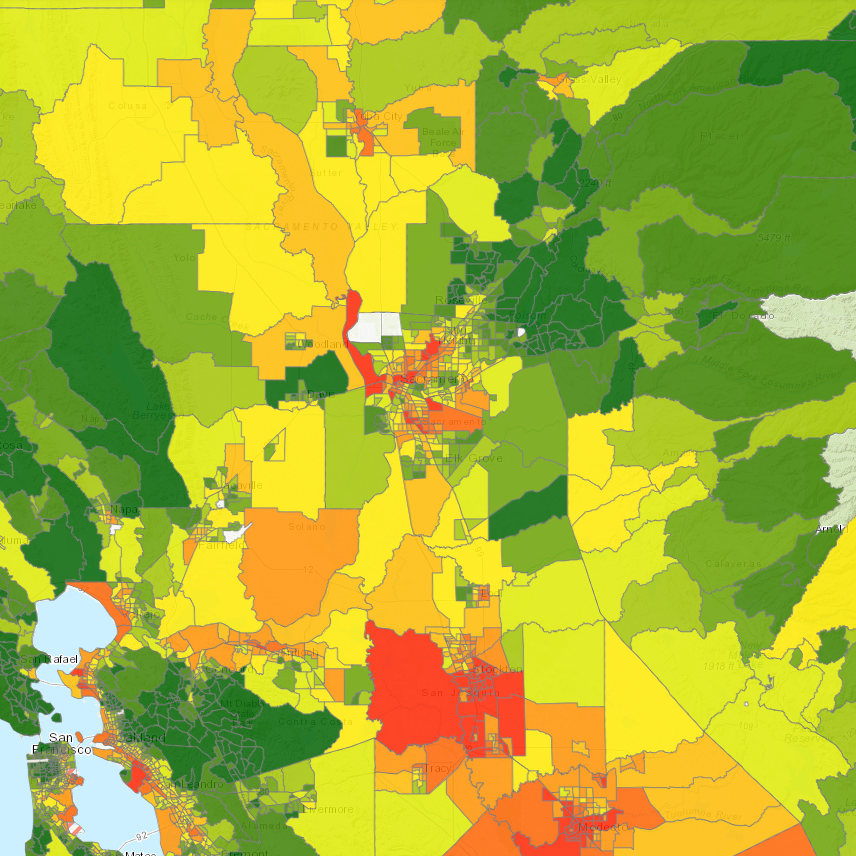 By Dorsey GriffithPublished On: November 15, 2021

An updated mapping tool to identify communities impacted by pollution in California has won high praise from the Little Hoover Commission, which in 2019 criticized the state for a lack of GIS leadership and multi-agency collaboration.

In a statement released this month, the Commission noted that the updated CalEnviroScreen released by the California Office of Health Hazard Assessment exemplifies the kind of collaborative work the commission called for to enable the state to direct resources to the most vulnerable communities.

The tool, enabled with geographic information systems (GIS), allows state policymakers and others to see which communities are impacted most by pollution. By mapping 8,000 census tracts, findings in each community can be compared to one another. The new version of the tool allows for enhanced analysis of air quality indicators, pesticide use, and water contaminants, including lead in drinking water.

The Commission noted that several other state agencies are now using the CalEnviroScreen to target resources to projects in communities that lack safe access to walking and cycling and to energy-efficient upgrades for low-income households.

But the Commission also reiterated its earlier recommendations, which they say have not been fully embraced or implemented.

Tamar Foster, the Commission’s deputy executive director, said Commission members in 2019 decided that geographic information systems (GIS) are an excellent tool to identify regional disparities in housing, social services, environmental threats, access to health care, education, among other areas. Understanding geographic differences, they argued, would better enable legislators and others to develop programs or direct resources to the most vulnerable areas.

“We quickly learned that the state doesn’t have the capacity to do the broad, expansive, multi-agency look, even though we recognize that lots of agencies have individual GIS systems set up and are using the tool.”

In 2019 the Commission recommended that the state develop a statewide GIS strategy so that departments and agencies can work more collaboratively and avoid costly duplication of technology expenditures. They also recommended that the state hire a full-time Geographic Information Officer, which they did in 2020. And they urged the Department of Technology to formalize a GIS Advisory Council.

Foster said the appointment of Isaac Cabrera to the position of State GIO was a “good first step,” but that the Commission envisioned a more elevated, agency-level role to enable a more centralized and “cross-cut perspective” for GIS projects.

She added that a formalized advisory council of policymakers and other stakeholders from the private and public sectors should be structured to advise the GIO on both implementation of policies and rules we well as technology strategies.

The State GIO did not address the question of elevating the position to an agency-level post, but said the office appreciates the Little Hoover Commission’s GIS mapping study.

“We agree that the CalEPA CalEnviroScreen approach sets an example we encourage others to follow,” Cabrera said in a prepared statement. “We are prioritizing two critical items for 2022: Creation of a GIS Vision and Strategy Plan for the state of California, and formalization of a State GIS Advisory Council. We believe these two initiatives will propel state entities to engage with, approach, and manage GIS holistically by creating a framework for the future, and a forum to discuss and prioritize efforts.”

The Little Hoover Commission is an independent state agency charged with looking for ways to make the state more efficient, effective, and responsive to constituents, Foster said.

“Our commissioners are very committed to addressing the issue of equity in the state,” she said. “GIS is the tool they feel can help policymakers visualize and understand where the disparities may be and where those gaps in services and funding are so they can be more informed when allocating resources or making decisions about what else may be needed.”