By Jessica MulhollandPublished On: February 2, 2022

On Jan. 31, 2022, the California Department of Technology (CDT) released its Statewide IT Annual Report for 2021, announcing the report’s release and focal points via Twitter: 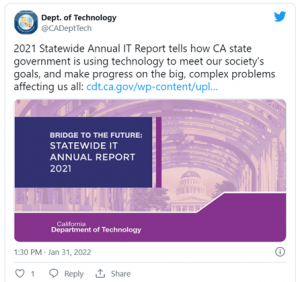 The report shared statistics related to security, the Project Approval Lifecycle (PAL), workforce training and innovation, and then highlighted several projects the CDT completed or made progress on throughout 2021 — both COVID-related and otherwise.

Trends in California Government IT

The report’s statistics on the CDT include, but are not limited to, the following:

In addition, the CDT only experienced one electronic incident that resulted in unauthorized disclosure of Personally Identifiable Information (information that can be used to distinguish or trace an individual’s identity, such as name, Social Security number, date and place of birth, to name a few) that was “contained in lost or stolen unencrypted electronic devices and storage media.”

As was the case for most state and local entities nationwide, the response to COVID-19 dominated much of California’s efforts throughout 2021, wrote former state CIO Amy Tong and Deputy CIO Russ Nichols in the report’s introduction.

Before California created the My Turn vaccine finder tool, the state was ranked last in vaccine distribution in the United States, the report says.

“Sixty-one different vaccine distribution systems that served niche communities left a void of statewide data to inform the optimal distribution of vaccinations statewide,” according to the report. “California needed a system that would handle the entire vaccine management process – from inventory to inoculation to reporting – to equitably vaccinate as many Californians as possible before the state reopened on June 15.”

Called the Vaccine Uptake Tool — which was a collaborative effort among the California Office of Emergency Services, CDT, the California Office of Digital Innovation, Esri and Google — this piece of technology essentially used data to increase vaccination in the state by combining “all areas of coverage into a score that would allow the team to identify localized concentrations of underserved communities,” the report states. “It exemplifies the power of technology in building not just more efficient and effective government, but a compassionate and fair government.”

Finally, California’s Digital COVID-19 Vaccine Record (DCVR) portal launched in June 2021, so every vaccinated Californian has “an opt-in, secure, and shareable digital copy of their COVID-19 vaccination records to use as they see fit.”

CDT also released the DCVR’s front-end and middle tier code to the public domain on GitHub, which means any state interested in deploying its own digital vaccine record system ca use the free code “to connect their own immunization registry back end and launch a similar portal to California’s.”

Tong and Nichols noted that throughout 2021, CDT leadership and staff “never let up as we moved to ensure vaccines were distributed equitably and quickly, and … created digital access to the vaccine record to help the state on its move toward reopening.”

Pandemic support wasn’t the only focal point in 2021; CDT also worked on and completed several initiatives, including, but not limited to:

“Since the pandemic, CDT’s continued collaboration with other departments, public and private entities and educators proved critical to getting projects done quickly” Tong and Nichols wrote. “What we do isn’t just about delivering technology — it’s about delivering fast and secure public services and making common technology easy to use for government workers and our residents.”