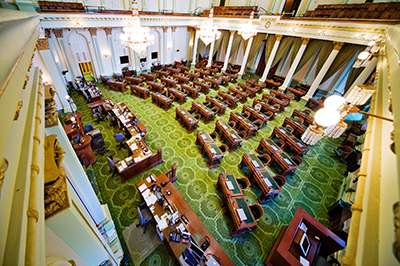 By Jaivon GrantPublished On: September 15, 2021

California is notorious for being in flames in what seems like an endless wildfire season. Factors including climate change and an increasing population in locations with flammable materials—like fuel and dry brush—all contribute to wildfires and the unpredictable damages they cause.

November 2018’s Camp Fire is the most destructive and fatal in California—causing 85 deaths, burning around 153,000 acres, and destroying nearly 19,000 structures. In 2020, the August Complex Fire burned more than one million acres.

Needless to say, emergency responders need to be able to quickly assess these fires by having access to reliable and timely information, and the ability to quickly share it.

Senate Bill (SB) 109, by state Senator Bill Dodd (D – Napa), passed the Legislature on September 7 to establish the Office of Wildfire Technology Research and Development (OWTRD) within the Department of Forestry and Fire Protection (CalFIRE). The OWTRD’s mission is to conduct research and test emergency technologies to improve the detection of and response to wildfires.

“17 of the 20 largest wildfires in California history have occurred since 2000, with six of the seven largest wildfires occurring in 2020 alone. Collectively, the fires have claimed hundreds of lives and caused tens of billions of dollars in damage,” said Dodd. “The escalating frequency and devastation caused by wildfires demands that we seek out emerging technology to address this urgent threat. This bill will help develop advancements and tap innovation from the public and private sectors. It will allow us to work smarter to protect life and property.”

Understandably, the bill received no opposition.

The Napa County Board of Supervisors wrote in support of SB-109, saying:

“[E]xtreme weather events and natural disasters are occurring more frequently and becoming more severe. Among other challenges, California has been confronted with persistent drought conditions, warming temperatures, all of which have led to an unprecedented tree mortality crisis. Dead and dying trees, among others, have been identified as key factors in the devastating fire seasons in recent years and will continue to increase the likelihood of more severe wildfires in the future…

While Napa County is working on investing in technologies to help prevent wildfires, the Board believes there should be a statewide agency responsible for studying, testing, and advising with regard to the procurement of emerging technologies and tools in order to effectively prevent and suppress fires, something the counties cannot do on their own.”

The coordination needed research, testing, and evaluation wildfire tools and technologies will cost approximately $1.6 million in the first year, and an ongoing $1.4 million (General Fund) to CalFIRE, according to the Assembly Appropriations Committee.